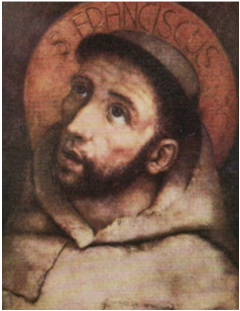 Our Founder: St. Francis of Assisi

St. Francis (1182-1226) was brought up in Assisi (Italy), the son of a prosperous cloth merchant. Up to the age of twenty he was one of the leading young men of this important trading town. Then, after becoming involved in a skirmish against the neighbouring city of Perugia, he was taken prisoner and held captive and sick for a year. He emerged from that experience with a growing conviction that challenged his previous materialism. He says in his Testament, that the decisive moment of choice came for him when he embraced a leper, a thing which had seemed repugnant to him before he saw Christ in all creatures.

Taking the Gospel as his guide he went about inviting people to praise God for His goodness and bounty.

In his spiritual life Francis was torn between the activity of wandering for two years in the wake of a crusade which led to an amicable meeting with the Sultan, and the solitude of the tree-clad inaccessibility of Mount Alverna, from which he emerged marked with the wounds of Christ when he was just over forty. (More on the life of St Francis)

St. Francis was not the man for institutions or for seeking a following, but the Lord sent like-minded men to him and such a responsibility prompted him to approach the Pope for approval for his Way of Life.

Equally attracted to a Gospel way of life, an eighteen year old daughter of a noble Assisi family, called Clare, came to the friars at the Porziuncola. Not content with a Benedictine convent at Bastia, nor with a group of women recluses at San Angelo di Panzo, she was finally enclosed at San Damiano under the unique rule for Franciscan contemplative life. Thus began the Poor Clares.

Members of the penitential movement, residing in their own homes and working to earn a living, turned to the friars for spiritual guidance, and began what today flourishes as the Order of Secular Franciscans.

Across the centuries the Franciscan charism has been preserved in various branches of the Order, with the First Order of friars continuing today in the Observants, Conventuals and the Capuchins.

For essays and texts about the Capuchin Reform go to: CAPDOX

By the sixteenth century the Friars Minor had grown into a large, complex institution. Friars seeking a more simple lifestyle were gradually formed into a distinct branch of the Order known as the Capuchins.

Many of the first Capuchins were attracted to contemplative prayer in hermitages, which they combined with travelling preaching.

The Order is a community of brothers, who strive to live the Gospel, following the Rule of St. Francis, taking the vows of poverty, chastity and obedience and living in community. 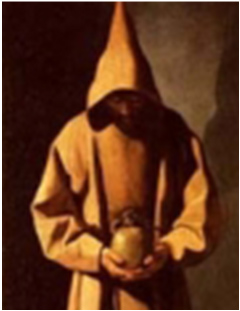